The Reputable and Rich Art of Fencing 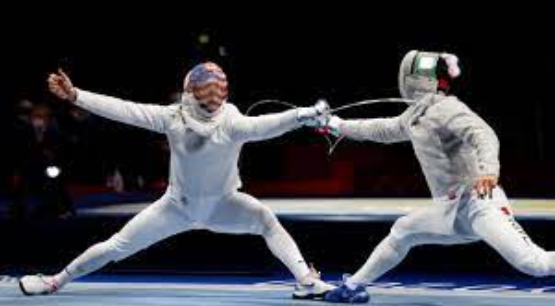 Fencing. To most, it could seem like a filler sport, wasted time in between more popular events. However, there may be more to the sport than what meets the eye.

Fencing has been a part of the summer Olympics since 1896, as it became increasingly popular in the late 19th century. The use of swords and swordsmanship dates back to Europe in the Middle Ages. While the use of swords goes farther, the concept of swordsmanship arose through the nobility in Europe. As armor was proving to become ineffective and useless because of their overall heavy size, so swords became the only remnant of such an era. However, due to a lack of protection from the loss of armor, sword bearers had to be extremely adept at manipulating their weapon skillfully. By the 15th century, guilds of fencing masters had emerged all over Europe. Early fencing was extremely rough, often utilizing wrestling techniques when fighting. Eventually, fencing was supported in England by Henry VIII. The early form of English fencing included a cutting sword and a buckler, a small shield worn on the person’s free arm. Soon after, the Italians had discovered the effectiveness of the point rather than the edge of the sword. By the end of the 16th century, the rapier, a lighter sword, was coupled up with a more controlled fencing style that emphasized skill and speed rather than brute force. This new version of fencing quickly spread all throughout Europe. Most of the wrestling aspects of the sport were abandoned and fencing was established as an art. Combat consisted of light movements and side steps with quick counter attacks. Defense was covered through a parrying system, where combatants would use their left hand, covered by a cloak or gauntlet, to parry attacks.

In the 17th century, King Louis XIV set the fashion of silk stockings, breeches, and brocaded coats as the official, more gentlemanly style of wear for fencing, a stark contrast from the doublet and hose, top boots, and cloaks of older generations. A new, shorter court sword became the norm for fencing, and the French style spread throughout Europe, in a similar fashion as the Italian style previously did. Although it wasn’t accepted immediately, the court sword soon became known as the ideal weapon, balanced between offensive and defensive capabilities. The French School of Fencing was an academic school, with a focus on strategy and form. Strict rules were used to teach this form of swordplay. Additionally, the foil, or practice sword, was used to create a safe training environment. To maintain safety, a mask was designed in the 18th century.

While fencing with the foil was considered as a use for schools only, dueling with swords still continued. However, as use of foil had become the norm, if one faced an opponent with a more traditional sword was put at a disadvantage. In a strange twist of fate, by the mid-18th century, when fencing had reached its peak in technique, theory and popularity, dueling with the sword had become highly unfavorable, essentially disappearing due to the growing number of firearms that became available. From that point on, fencing was used strictly as a sporting event, growing to the sport we now see today.

While the sport had grown over the years, that doesn’t mean that there weren’t any road bumps during its evolution. In a somewhat recent event, at the 1912 Olympic games, France withdrew its team over a dispute regarding the target area for foil, and the Italians refused to fence in the épée events because of a rejection to increase the length of the épée blade. Due to this dispute, in 1913 the Fédération Internationale d’Escrime was founded and became the body of international fencing for amateurs, both in the Olympic Games and in world championships.The equipment for fencing is used by all combatants. All fencers are required to wear a jacket, a mask, a glove, trousers, white stockings, flat shoes, a body cord, and a weapon. There are three different types of weapons, each with their own set of accompanying rules.

Fencing is a history-rich sport, filled with plenty of important figures and rules that have made it the sport it is today.