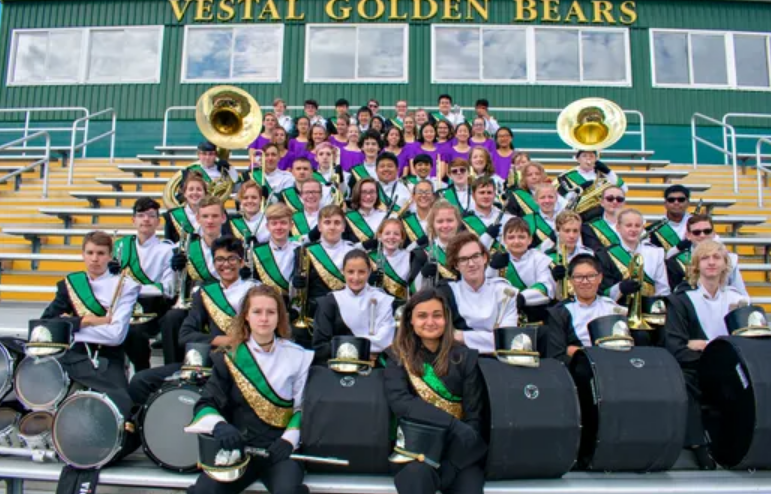 As the district works through online schooling, the Vestal Marching Band is meeting one day per week via Zoom. Members go about their normal rehearsal; stretches and breathing exercises, sectionals and spirit days. Only this year, they’re meeting in breakout rooms instead of in the high school parking lot. The band has rehearsed two different pieces as a group, one of which was just released on Youtube.

Vestal is one of many bands that annually compete in the New York State Field Band Competition. With all competitions being cancelled for the season, the state organized a video project for the NYS marching band students. Putting on “New York State of Mind” by Billy Joel, students submitted videos of their part and the videos were later mixed for an audio and visual performance. Vestal students practiced the piece virtually for weeks, working through the challenges that the season is facing. The video was released on Nov. 1 on Youtube.

As well as the group recording, some members of the marching band also participated in an Individual & Ensemble competition among the state. Students had the opportunity to submit a solo, duet, ensemble, or visual recording to be judged by band directors and field band adjudicators. Though an optional competition, Vestal had many students participate and take first place in their section. The video was also released on Nov. 1 and walks through the scores and placements of all of the competitors.

Keep your eyes peeled! The Vestal Marching Band has been working on a new song in rehearsals. Video release date is TBD. The band is accepting new members at any time, grades 7-12. Come join the band for a new online experience! Contact Greg Harris for more information.